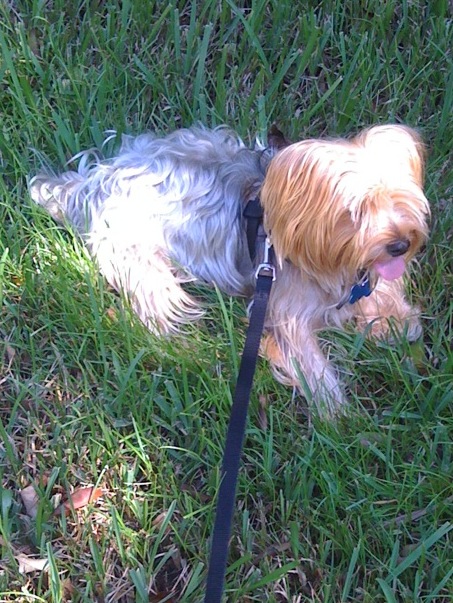 Although classified as a toy dog, this small dog has huge presence and is a brave and an adventurously fun breed of dog.This small breed is the second most popular breed worldwide.

They enjoy defending their territory and are extremely possessive of family members, especially their one and only parent. The Yorkie displays many behaviors similar to jealousy and can become aggressive towards strangers and other dogs, despite their size.

The Yorkshire terrier enjoys swimming, trips to dog beaches and dog parks. They show their eagerness by frequent barking and are known to attack dog breeds much larger than themselves.

Purebred Yorkies have dark steel blue fur on their main body parts, with a luxurious golden tan on their face, chest and legs. Their ears are normally pricked and tail held high when active.

Intelligent and territorial as a breed, makes them have a tendency to mark their territory inside and outside their homes. This makes them harder to train, especially male Yorkies who insist on marking their spots, when encountering fellow canines.

Yorkies should be groomed every day and maintaining a short coat is often much easier for many Yorkie parents. Long haired Yorkies do get knotted and matted, especially if they play with other dogs.

Vital steps in keeping your Yorkie healthy include brushing teeth regularly, since this breed is vulnerable to gum disease and more serious teeth conditions. Yorkies also are more prone to eye proptosis,so be especially careful when playing around much larger dogs. They also frequently suffer from narrowing of the trachea or collapsing of the trachea ,so watch out for coughing or heaving sounds.

•    Smoky, a Yorkie hero from Cleveland, Ohio, but a war hero of World War II .Smoky was found alone in a ditch. Smoky parachuted out of airplanes and went on over 100 missions.

•    Sylvia, a Yorkshire terrier was owned by Arthur Marples of Blackburn, England, and was the smallest dog in recorded history. Sylvia passed away in 1945. Standing at only 2.5 inches tall at the shoulder, Sylvia measured 3.5 inches from nose tip to tail, and weighed close to 4 ounces.

•   During the period from 1995 through 2002 Guinness World Records listed a Yorkshire Terrier named Big Boss, as the smallest dog in the world. Big Boss was listed at 4.7 inches tall.